The Accustrike Dart is a Nerf dart to be released in 2017. They are the main ammunition for Accustrike series blasters. They have a much shorter reach than Elite Darts, due in part to their weight distribution. But, what these darts lack in range, they make up for in accuracy. Reportedly, Hasbro engineers had spent over two years developing this dart, having experimented with different tip designs during this period. 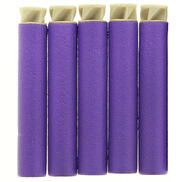 Rebelle version Accustrike Darts
Add a photo to this gallery
Retrieved from "https://nerfpedialegacy.fandom.com/wiki/Accustrike_Dart?oldid=43140"
Community content is available under CC-BY-SA unless otherwise noted.