The Apollo XV-700 is a 2015 Nerf RIVAL blaster that holds 7 High-Impact Rounds. It is the entry-level model in the series, and packs a punch despite being small. It is extremely potent, having excellent range and power. As it belongs to the RIVAL series, it is meant for older Nerfers.

In 2017, a new version will be released as part of the Target-exclusive Phantom Corps. sub-series with a 12-round magazine, along with a promotional Star Wars Boba Fett edition, which also includes a special edition face mask (themed after Boba Fett's helmet) and High-Impact Rounds.

The Apollo is the small blaster of the line. It has a large charging handle located up top, which is to be pulled back to prime the blaster. The gun also has a safety, which prevents it from being fired unless it is disabled. It comes in two colors; red and blue. The RIVAL logo is seen on the side. 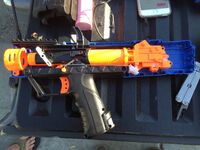 The Apollo has a very large direct plunger and a firing trigger, along with a few springs.

The Apollo is the secondary of the lineup.

The Apollo is the smaller brother of the Zeus MXV-1200.

Like all other blasters, the Apollo has faults. The main fault is that could be hard to prime. This is mainly due to having a very strong and heavy spring.

Step 1 - Load 7 rounds into the included 7-round magazine.
Step 2 - Load the magazine into the pistol grip.
Step 3 - Disengage the safety if you haven't already.
Step 4 - Pull the charging handle back and release.
Step 5 - Pull the trigger to fire a round.

Retrieved from "https://nerfpedialegacy.fandom.com/wiki/Apollo_XV-700?oldid=42971"
Community content is available under CC-BY-SA unless otherwise noted.