The Blast Fire DX 500 is a 2001 Nerf Power Nerf blaster that holds 5 Micro Darts. It was one of the most powerful blasters back when it was released, but was still not as powerful as the similar PowerClip DX 1000. It had a distinctive large orange button that activated its Blast Fire technique, which allowed it to fire all five darts at a time. It sold extremely well, and is sought after by collectors today due to its modification potential. The blaster was discontinued a few years after. However, its successor, the Hornet AS-6, is still available. It cost $7.99 when initially released, and received very favorable reviews.

The Blast Fire DX 500 is a single-fire and multi-fire combination blaster, and is able to fire one dart or spray all five at once. It has a black body with the Nerf logo embossed on the sides of the blaster in orange paint. A green pump handle is located at the bottom of the blaster and is used to pressurize it and get it ready for firing. A black handle which is connected to the body has a grey grip on it, which houses an orange firing trigger located in a black trigger guard. A green slide is seen on the rear of the blaster, and is used to reset the blaster before actually pressurizing it. The main attraction of the blaster is its orange blast button. Pushing this button causes any pressurized air stored in the Blast Fire's air tank to rush out of all of the five barrels of the blaster, which causes all five darts to fire, if fully loaded. 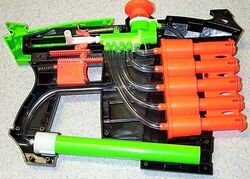 The Blast Fire's internals are standard for a blaster like this. It has a firing trigger, air delivery tubes, air tank, air pump, overpressure valve, blast button mechanism and reset mechanism. These parts work very well.

The Blast Fire can take up a multitude of roles, from a close range to a long range weapon. It easily acts as a shotgun, due to its blast fire feature, which allows one to spray darts in all directions without the need for precision. It can also act as a sniper rifle, due to its absurd range of sixty feet and its good accuracy. Because of its versatility in battle, it is an extremely good blaster, and can be used in any war, in any situation, and at any time effectively.

The Blast Fire is extremely similar to the Mad Hornet, Hornet AS-6 and Tetra Strike; the third blaster being from Buzz Bee. They are all able to co-relate with each other due to them being multi-shot, semi-automatic, air-powered blasters, but that is where their similarities end. The Mad Hornet and the Blast Fire share their semi-automatic capabilities. The Tetra Strike and the Blast Fire both have semi-automatic capabilities, but also resembles it in a certain way despite it not having a blast button. In spite of that, the Tetra Strike is able to fire all four darts at once, by quickly pulling back its firing trigger all the way. Out of all the three blasters, it is most similar to the Hornet AS-6, due to both having blast buttons and reset slides. However, the Blast Fire DX 500 is much more durable and reliable compared to the other two

Like all other blasters, the Blast Fire has faults. The main fault of the blaster being that it needs to be reloaded often, due to its paltry capacity of five rounds. This is especially so when blast firing the Blast Fire, since it uses up all the ammunition in the blaster all at once. A simple solution is to stock up on ammunition.

Step 1 - Pull the green reset slide back and release.
Step 2 - Pump the blaster five times. Do not exceed this amount or it will damage the blaster.
Step 3 - Pull the trigger to fire one dart at a time or push the blast button to spray all five.

Retrieved from "https://nerfpedialegacy.fandom.com/wiki/Blast_Fire_DX_500?oldid=43363"
Community content is available under CC-BY-SA unless otherwise noted.