The Cyclotron (as a prototype called the Rapid Fire Ballzooka) is a 2003 Nerf Atom Blasters blaster that holds 6 Ballistic Balls. It is no longer available for purchase since its home line has since been discontinued. It is fired by turning a crank. It got good reviews when it first came out.

The Cyclotron is one of the strangest blasters on the market. It has a blue body with a grey circle on the bottom where a crank is located. A blue handle with a grey grip is also present on the front of the blaster. The circular part where the crank is housed has a sticker saying "Cyclotron", which is bent around the circle for a cool effect. At the rear, there is a small orange circular port, which is meant for the Cyclotron Stick Magazine to be inserted into; it being a transparent orange magazine. It was only sold in 2003, and didn´t make the jump to the Action Blasters line, making it a very rare blaster, despite it not being expensive. 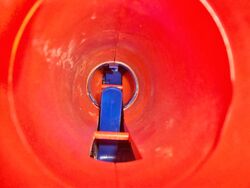 The internals of the Cyclotron are unknown, however, it looks like it used a hard plastic flap that is bent backward, and then when the ´catch´ releases, it flys forward, and thrusts the ball out the front of the blaster, a setup that is unique to this blaster. These parts work reliably, but they do break sometimes.

The Cyclotron seems to be the assault rifle of the Atom Blasters line, due to its very high rate of fire and easy operation.

There are not many blasters that the Cyclotron can relate to; the closest blaster it can co-relate to is the Razorbeast, due to both having this strange mechanism that fires upon the crank; however, said blaster fires Mega Darts from a 15-Dart Chain.

Step 1 - Load 6 balls into the clip. Make sure you hold down on the balls as you are loading them in or they will fly out of the clip.
Step 2 - Stick the clip into the hole at the back of the blaster.
Step 3 - Repeatedly turn the crank to fire off balls.

Retrieved from "https://nerfpedialegacy.fandom.com/wiki/Cyclotron?oldid=43821"
Community content is available under CC-BY-SA unless otherwise noted.