Not to be confused with the Firefly (Water Warriors).

The name for the blaster was derived from its main feature; when the trigger is pulled, a light in the blaster's cylinder flashes momentarily before shutting back off; this happens every time one pulls the trigger, but not if one pulls it rapidly due to the light having to switch back off and cool down before flashing again. If any glow darts were in the cylinder, they would get charged by the light and then fired, though the Iron Man version lacks this. The Firefly retailed for $24.99, and got extremely positive reviews. It is no longer available for purchase.

It has grey and black grips on the pistol grip, and a orange firing trigger. The majority of the blaster's body is yellow. The rear of the blaster is of a mixture of grey and black designs. In the stock, there are eight dart holders, four on each side of the stock. An orange priming handle is seen on the top of the blaster, behind a yellow cylinder guard.

When the trigger is pulled, a set of electronics activate which causes a flash bulb located near the cylinder to light up momentarily. This light helps to charge up the darts in the blaster, and allow them to glow. When the blaster is primed and the trigger is pulled, the dart will be sent flying and glowing through the air until it hits a wall, at that point the effect will dissipate until the dart no longer glows. The cylinder is held in by an orange contraption. 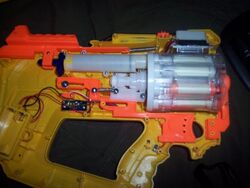 The Firefly's internals are a bit different than what one would normally expect in a revolver blaster. It has a direct plunger, flash bulb, electrical wires, plunger catch, plunger catch spring, slide return spring and revolver turret.

The Firefly is large, and unlike most other revolvers, cannot be put in a holster. In fact, it is the largest out of all the revolver blasters. Because of its use of glow darts, it can be seen as the kind of weapon for nighttime operations.

The Firefly is extremely related to the Light It Up series of blasters. The blasters in the series both have similar light up features to the Firefly. It is also related to the 1997 Electric Eel. It had a flash bulb feature, but held two times less ammunition.

Like all other blasters, the Firefly has faults. The main fault is that it is very bulky.

Step 1 - Load eight darts into the revolver turret.
Step 2 - Pull the slide back and release.
Step 3 - Pull the trigger to fire.

1 of 1
Add photo
Retrieved from "https://nerfpedialegacy.fandom.com/wiki/Firefly_REV-8?oldid=43397"
Community content is available under CC-BY-SA unless otherwise noted.