The Fusefire is a Nerf Zombie Strike Vortex blaster released in 2014. It will be able to hold up to 10 Glow Disks. It is possibly is the successor to the Vigilon. There is integrated storage for disks below the barrel, similar to the Ripshot. It holds batteries in its handle, and has a clear tactical rail on the top. The magazine for the dics is horizontal, very much like a tubular magazine rifle or shotgun. The magazine holds 5 discs, and is loaded from the rear of the blaster. It has a feature that allows it to glow in the dark when a switch is kicked. It costs $19.99, and got excellent reviews when it first came out.

The Fusefire is a large Vortex blaster. It has a brown body with black accents, as well as a transparent green tactical rail at the top. There are lights underneath the tactical rail, which light up when one flips a switch on the blaster. This helps to charge up the discs in an integrated magazine. At the rear of the blaster, there is a small orange priming bar, similar to a Proton's, albeit with a rather squarish shape. An unjamming button is also present on the Fusefire's priming mechanism. Above the priming mechanism, there is a small rectangular port for one to load discs into, which goes into an internal magazine, which in total holds five discs. When the priming mechanism is pulled out, it lets the last disc in the magazine drop down onto a platform on the priming mechanism, and when released, the mechanism will go back into its original position and the disc will be ready to fire. 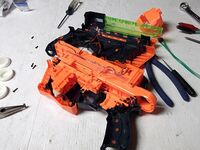 The internals of the Fusefire are a bit abnormal of a blaster of this type. It has a torsion spring, spring release, slide release, firing trigger, wires, lights and a switch to enable the lights. These parts work well and reliably, but if batteries are left in the blaster for too long, they can corrode the electronics in the blaster.

The Fusefire acts as a semi-automatic disc-shooting pistol in the Zombie Strike line. Due to it having an integrated magazine and a rather large capacity, combined with an integrated disc storage, it can act as a poor-man's assault rifle if need be, that is, if one can prime and fire it fast.

The Fusefire is the successor of other disc blasters with integrated magazines, such as the Vigilon and Diatron. The Diatron, however, fires two discs at a time instead of one, making the Vigilon act as the Fusefire's spiritual predecessor, albeit the former is still sold today under another color scheme.

Like all other blasters, the Fusefire has faults. The main fault of this blaster being its bulkiness. The Fusefire is extremely bulky when compared to the Ripshot and Ricochet, and could be hard to conceal and carry around and hard to store. This is likely because of the electronics found inside the Fusefire, which activate the lights.

1 of 3
Add photo
Retrieved from "https://nerfpedialegacy.fandom.com/wiki/Fusefire?oldid=38501"
Community content is available under CC-BY-SA unless otherwise noted.