The GunSmoke is a 2014 Buzz Bee Air Warriors blaster that holds 1 Micro Dart in a shell. The blaster is break action, much like with the Double Shot, X-Shot Vigilante and Air Zone Double Barrel Blaster, and acts like a real-life break-open lupara or a Thompson Center Arms Contender. It holds one dart in the break open action, and two more darts in the ammunition compartment at the rear of the blaster in the stock, the least of any blaster with a hidden dart storage function. The main attraction about the GunSmoke is its ability to smoke like a real firearm whenever fired, and this is achieved by using a GunSmoke cartridge. It is put into the compartment beneath the barrel, and has a durability of five-hundred shots. Because of its ability to emit smoke like a real firearm would, it is a good candidate for cosplaying, due to one looking cool with the smoke being emitted out of the barrel when fired. The GunSmoke has a claimed range of thirty feet, and costs HKD 199.95 or USD 14.99 It is said to be a "Toys 'R Us exclusive" despite it being in some Wal-marts . Three "AA"-size batteries are required to power the GunSmoke.

The GunSmoke is a novelty blaster, with a novelty effect: the smoking barrel effect. The blaster has a mostly yellow body with green accents on its side, two orange barrels with one being a faux, an orange lever, and an orange trigger. The blaster is very simple in design, resembling some sort of break-action hunting rifle, however, it lacks the ability to add scopes such as the Range Master's scope. As stated earlier, the blaster has two barrels, the bottom one being a faux. This is because the bottom barrel houses the area where the GunSmoke cartridge is inserted. The inside of the faux barrel is threaded, and when the blaster has not been taken out, is covered with a white piece of paper. There is a small hole in the bottom of the actual barrel: this is where the smoke comes out of. On the right side of the blaster is the battery door, which houses three "AA"-size batteries, which power the smoking effect. The batteries are arranged in a rather interesting fashion, similar to some bootleg bump-and-go toys; where there are two compartments for batteries, but one is deeper than the other, with the deeper compartment holding two batteries. 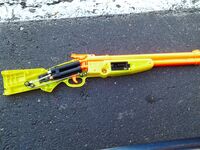 The internals of the blaster are somewhat abnormal; the blaster has two plungers, a few electronic components and wires, air delivery tubes, strings, pulleys, plunger catches and a spring-loaded lever, which keeps tension on the strings in the pulleys of the blaster. Some of these parts have their own uses; the strings are the standard kind that one would see in a Double Shot-esque blaster, and are used to pull back the plunger while breaking the barrel open; the front of the blaster houses a heating element, which is used to heat up the compound inside the GunSmoke cartridge; the two plungers have different purposes, the main plunger is for firing the dart, while the second plunger is used to create a momentary blast of air, which moves a small plastic rod far enough to press an electric switch, sending a small amount of current to a smoke unit, located at the front. The air delivery tube then extends to that area. The smoke unit is activated when the GunSmoke cartridge is pressed and threaded onto the smoke unit. Every time one fires the GunSmoke, whether it be loaded or not, the small amount of energy from the smoke unit is bled off as heat within the smoke compound. This produces the smoke effect, which according to those who own the blaster, smells quite acrid.

The GunSmoke seems to be the shotgun in the lineup, due to its use of shells, a smoking effect like a smoking gun, and its use of a break-action reloading style. However, it does not use two barrels like most other shotguns, but because of its single barrel, resembles a punt gun instead.

The GunSmoke seems to be a cross between the Double Shot and Predator, and could very well be their "siblings". All blasters feature ammunition storage in them and have similar ranges, but the latter is a bolt action blaster and does not use shells.

Like all other blasters, the GunSmoke has faults. The main fault of the blaster is the smell the smoke creates when fired. Many people have described the stench that is produced as acrid, and stays for a while. A second fault is that it might be faulty out of the box. This is evidenced by Awesomely Nerf's GunSmoke that Buzz Bee had sent him; it was not producing smoke but still produced the acrid smell. This was due to a piece of cardboard stuck in the smoke release chamber. However, that problem was easily fixed.

Retrieved from "https://nerfpedialegacy.fandom.com/wiki/GunSmoke?oldid=40894"
Community content is available under CC-BY-SA unless otherwise noted.