Not to be confused with the Hailstorm, a blaster with a similar name but is otherwise unrelated

The Hail-Fire (formerly known as Hailfire) is a 2012 N-Strike Elite blaster that can hold up to eight clips in a circular rotating ammo rack. It was released by Nerf on 4th August 2012. An official demonstration video was released during the night of June 14 to 15, 2012, showing the operation of the blaster. The Hail-Fire has two handles: a rear pistol grip and an advance handle on the top front. There are two triggers on the rear grip. The top trigger is the firing trigger and the bottom trigger is the acceleration trigger. The blaster has a rotating ammo rack that can be rotated to the next clip by operating the advance handle on the top front of the blaster, as seen in the video. The video also shows that the Hail-Fire is powered by four AA alkaline batteries. It costs 40 USD, and when fully loaded with eight 18 dart extension clips, becomes very heavy. It has a blue paint job and is slim at the back, then morphs into a large circle, almost like a lazy susan of clips, which is very wide, then the advance handle near the front of the blaster and then the barrel.

If you use eight 18 dart extension clips than you get the maximum capacity of 144 darts. Currently, this is the biggest capacity of a dart blaster made by Nerf. The teaser video that Nerf/Hasbro released confirms that the drum magazines are too big for the blaster.

The Hail-Fire is quite versatile, as it can fit the role of an assault rifle as well as a light machine gun. It can also go in between the two if the user would like. How the blaster handles depends on what capacity clips the user uses. 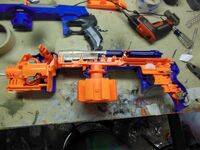 The Hailfire was the biggest blaster in the N-Strike Elite, and because of this is the primary blaster of the series.

The Hailfire is very similar to the Stampede ECS and the Vulcan EBF-25 in the form of size and appearance. It also has a similar appearance to the other blasters in the N-Strike Elite line. As of yet it does not have much functional relation to the blasters in its line, but it does share flywheel components with the Stockade and Stryfe as well as the Elite Rayven.

Step 1 - Load a clip with streamline darts.
Step 2 - Slide the clip into one of the rotating clip grooves.
Step 3 - Repeat until all slots have a clip in them.


Quick Reloading: Move the Advance Grip forward until it can't move anymore. Then pull back again, and a new clip will rotate into place.

Retrieved from "https://nerfpedialegacy.fandom.com/wiki/Hail-Fire?oldid=38536"
Community content is available under CC-BY-SA unless otherwise noted.