The Jolt EX-1 (known as the Jolt in later packagings) is a 2011 N-Strike blaster that can hold 1 Whistler Dart with default ammunition. It is an improvement over its predecessors, such as the Secret Strike AS-1 and the Hidden Shot. It features a compact priming bar under the handle, which one uses by pulling down on. It was rereleased under a multitude of lines, and has received praise for being extremely powerful, accurate and concealable, all fitted into a small package. It was initially released in 2011, albeit quietly, with an orange paint scheme, black trigger, and "JOLT" in big, black letters engraved on the side. It was later redesigned and given a rerelease in 2013, this time bearing N-Strike Elite colors, and an orange trigger and priming mechanism. The most noticeable change of the blaster was the addition of an orange muzzle on the front of the blaster, and it has remained there ever since it's induction onto the blaster. It was given yet another redesign in the same year, this time in Zombie Strike colors, and had a clip-on sight to help with aiming. It had another redesign in 2014, this time, affecting the entire shell. It was given a girly paint scheme and a bigger cocking rod, because of its induction into the Rebelle line. Because of it being released multiple times, it has become a popular blaster among many. It cost $4.99 when released, and received favorable reviews when first released.

The Jolt is a small concealed-carry type blaster, that holds 1 dart. It has an orange, blue, green or white body, which is present on the N-Strike, N-Strike rerelease, Zombie Strike and Rebelle blasters respectively. It has an orange muzzle for easier dart loading, which is present on all but the orange blaster. It has a black, orange or pink trigger, found on the N-Strike, N-Strike rerelease and Zombie Strike and Rebelle versions respectively. It has a cocking piece situated at the bottom of the handle, which is pulled down to prime the blaster. This piece got a redesign in the Rebelle version; it gained a ring so that it would be easier for people to grab. This cocking piece is held down by a greyish-black piece on the bottom of the blaster, which acts as the bottom cover for the handle. It is only held in by four screws, after which the whole part can be taken off. There are four even smaller holes on the bottom that act as an air outlet so that air can escape from the blaster when firing. 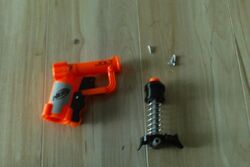 Because of its size, the Jolt lacks any real internals; however, there is a spring, air restrictor, cocking rod, plunger catch and firing trigger. These parts work very reliably.

The Jolt acts as the concealed-carry blaster of the lineup, just like with some real firearms as with the Chiappa Rhino series of revolvers, with the 200DS variant acting as the concealed-carry gun of the line. Because of its small size, it is suited to having a stealth role, and can be pulled out at any time and to surprise people with just that one shot. However, because it is quite powerful, it also fills the role of being a sidearm, but one will have to reload often due to its paltry capacity of just one dart before needing to be reloaded. It can also fill the role of being a last-ditch weapon, and can be pulled out when one is cornered due to its small size. Because it fulfils all the aformentioned roles, the element or surprise is a key factor of the Jolt's positions in the themes it is in.

This blaster is very similar to the Triad EX-3, both being stealth weapons. However, the Triad is not suited to this role as well as the Jolt due to it being around three times bigger than said blaster. Despite it being bigger than the Jolt, the Triad's ammunition capacity is three times bigger than that of said blaster, one being able to blast three shots before needing to reload. Also, the Triad has a smart air restrictor system, which disallows air to come out of any empty barrels to help prevent dry-firing.

Like all other blasters, the Jolt has faults. The main fault of the blaster is the fact that it has no other known modifications other than the popular and easy method of drilling out its air restrictors. However, it makes a good candidate for blaster integrations due to its small size. Another major problem is the shallow capacity of only one dart, which will make anybody using this blaster reload often, which can be a pain for many. The blaster is also very small, which makes it hard for older Nerfers to hold. Despite its size, it has an extremely comfortable handle with many grooves for the wielder's fingers.

Step 1 - Load one dart into the muzzle.
Step 2 - Pull the cocking rod down until it clicks.
Step 3 - Pull the trigger to fire a dart.

Review pages are locked in order to prevent counter intuitive edits and bias.
If you wish to change something with the review, discuss it on its talk page.

Retrieved from "https://nerfpedialegacy.fandom.com/wiki/Jolt_EX-1?oldid=34822"
Community content is available under CC-BY-SA unless otherwise noted.