Lazer Tag is an app released by Hasbro to work with the LTAR. The application is like a first-person shooter-type game, and basically acts like one. The game involves interaction with the function button on the LTAR for actions such as reloading. One can switch between many different taggers from the LTAR's reload button, a first for any game. It is free to download on the App Store.

Lazer Tag is a standard first-person shooter game, which requires the use of the LTAR's iOS device dock, which is included with said blaster. After starting the game, there are two options: Blaster Mode and No Blaster Mode; Blaster Mode requires one to connect the dock to the top of the LTAR. One can switch between three teams, numbered Team 1 to 3. Singleplayer and multiplayer modes can be chosen, with multiplayer mode being like playing online with other friends; this requires a second LTAR in order for it to be functional. After selecting a game mode and team, the game begins. 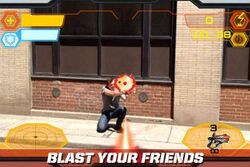 The heads-up Display for the app is a standard heads-up display for a game. On the top left hand corner is two bars; the orange bar represents the amount of tags remaining, while the blue bar represents the amount of shield time the blaster has remaining; this bar slowly goes down as the shield is being used. On the top right hand corner, is yet another two bars; the orange bar represents the number of Talus Airstrikes one has left, while the yellow bar represents the duration of the game so far. The radar is located on the bottom left hand corner, and the blaster and the amount of ammunition left and the amount of reserve ammunition remaining is located on the right. In the middle of the screen, there is a reticle, that changes for every blaster. If an enemy is sighted, the reticle turns red; this causes the LTAR to repeatedly bleep and play a voice clip saying "Danger!". When shooting, a blue laser beam is projected onto the HUD, to simulate that the blaster actually fires lasers. If an enemy is hit with a laser, explosion effects are seen. If hurt, simulated glass shattering is seen.

Retrieved from "https://nerfpedialegacy.fandom.com/wiki/Lazer_Tag_(app)?oldid=36921"
Community content is available under CC-BY-SA unless otherwise noted.