The Rapid Fire AS-20 (originally the Rapid Fire 20, colloquially known as the RF20) is a 2001 Airjet Power series blaster that can hold up to 20 Micro Darts with default ammunition. It was one of the first, if not the first, Air System blaster. The blaster was the successor to the then-still rather new WildFire, but with reliability fixes. The blaster was known for its select-fire capabilities, thus making the Rapid Fire 20 the first selective-fire Nerf blaster, and the first and only select-fire air-pressured blaster of its kind. It also has a rather high rate of fire, at about eight darts a second. However, it is still beaten in terms of fire rate by the Magstrike AS-10, which fires at ten darts a second. Despite this, the Rapid Fire 20 makes a good blaster for stock wars. In 2010, the Rapid Fire 20 was released under the N-Strike line, this time being given the name Rapid Fire AS-20, which it still holds to this day. The Rapid Fire AS-20, though discontinued now by Hasbro, is still available in some stores, and is a very good blaster to pick up. It sold dfor 25.99 USD when first introduced, and was a Target exclusive.

The Rapid Fire AS-20 is an unusual-looking blaster in the N-Strike line. It sports an orange turret which holds twenty darts; this turret is held up by a big black heat shield-like contraption. The blaster's orange firing trigger is hidden behind the heat shield-like contraption, and on the shield, is a yellow knob, meant for adjusting whether the Rapid Fire will fire single shots or fire a burst at once. At the grips of the blaster, there is a clear tube where some of the internals can be seem, especially the blaster's plunger, which moves back and forth every time the blaster is fired. A black pump is seen on the front of the blaster; there is some resistance when pumping the blaster up. 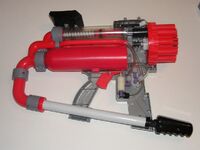 The Rapid Fire AS-20's internals are identical in operation to the Nerf Wildfire's, but don't suffer from the lack of quality control that plagued the Wildfire.

The Rapid Fire AS-20 is the assault rifle of the series, and essentially acts like one due to its high capacity and selective fire capabilities.

Like all other blasters, the Rapid Fire AS-20 has faults. The main problems are that it has an extremely long reload time, and that all the darts are expended rather quickly when firing.

Step 1 - Load twenty darts into the turret up front.
Step 2 - Pump the blaster up thirty times. Do not attempt to pump more than the amount stated as it may damage the blaster.
Step 3 - Adjust the knob on the side to fire in either single shots or multiple rounds at once. This step is optional and is not required to fire the blaster.
Step 4 - Pull the trigger to fire a dart if the knob is set on single shot, or a whole stream of darts if the knob is set to full auto.

1 of 4
Add photo
Retrieved from "https://nerfpedialegacy.fandom.com/wiki/Rapid_Fire_AS-20?oldid=43545"
Community content is available under CC-BY-SA unless otherwise noted.