The Rayven CS-18 is a 2012 N-Strike Light It Up blaster that comes with an 18-Dart Firefly Tech Clip and 18 Streamline Glow Darts. It is a flywheel-powered blaster, requiring 4 AA batteries to operate. The included 18-dart Firefly clip can charge up the glow darts by using a set of LED lights that is activated by a slide switch, and requires 3 AA batteries to do so. It uses Firefly Tech. As part of the Light It Up sub-series, the blaster itself is light green instead of the yellow color of most standard license N-Strike products. The Rayven, though being a flywheel-powered blaster, is very quiet by most flywheel standards. The gun has a tactical rail on the top, one on the right-hand side and is compatible with Barrel extensions. The Rayven is the first bullpup clip-fed blaster; this was carried onto its future variants, an N-Strike Elite variation and the Rayven Stinger, both of which are of a different color scheme and have very good ranges. It was quietly released on the 27th of December 2011, and was officially released in March 4, 2012. It cost 29.99 USD when first introduced, and got positive reviews when first released.

The Rayven CS-18 is a bullpup-style blaster that was introduced in 2012. It has a green body, and a gray pistol grip. It has two orange triggers, a firing trigger and an acceleration trigger. The firing trigger operates a dart pusher in the rear. The pistol grip is connected to a green handle which leads to the rear of the blaster, which is where all the mechanisms are. A black jam door is at the rear of the blaster, and is of the "flip-up" type, similar to the Recon CS-6, Retaliator and Stryfe jam doors. A grey buttplate is seen at the very rear of the blaster, where two sling mounts can be seen. The blaster has a green carrying handle. An orange clip release button can be seen behind the clip insertion area. 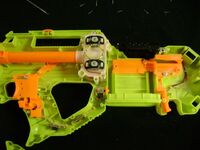 The internals of the Rayven CS-18 are a little bit sub-standard for a blaster with flywheels, as the Rayven is of the bullpup type. It has a firing trigger, acceleration trigger, barrel, electrical wires, pistons, two vertical flywheels and a dart pusher.

The Rayven CS-18 could act as a light assault rifle or submachine gun in the line, due to its ability to use multiple types of clips and drums. As the flywheels seem to increase the blaster's accuracy, it could be used as a poor man's sniper rifle, but is not recommended as the flywheels can possibly give away one's position. It is extremely good for night fights, as it has a clip which can charge up glow darts, which can help increase the intensity of night fights due to glowing darts flying everywhere.

The Rayven CS-18 is the predecessor to two similar blasters, and possibly the upcoming Crossbolt. It is the cousin to the Lumitron, another blaster in the same series.

Like all other blasters, the Rayven CS-18 has faults. The main fault is that it uses batteries, so there is no manual way of priming the blaster, so it is virtually useless without the use of batteries.

Step 1 - Load 4 "AA"-type batteries into the battery compartment of the blaster.
Step 2 - Load 3 "AAA"-type batteries into the Firefly Clip.
Step 3 - Load 18 Glow Darts into the clip.
Step 4 - Pull the acceleration trigger to rev up the blaster. You must hold down the acceleration trigger to get the motors revving.
Step 5 - Pull the trigger to fire. It is recommended that you wait a few seconds before firing again to get the best ranges.

Retrieved from "https://nerfpedialegacy.fandom.com/wiki/Rayven_CS-18_(N-Strike)?oldid=41855"
Community content is available under CC-BY-SA unless otherwise noted.