The Ricochet is a 2014 Nerf Zombie Strike Vortex blaster. It holds 1 XLR disc. It is the successor of the Proton. The blaster is colored in the orange and green paint scheme of Zombie Strike blasters. It retailed for $7.99.

The Ricochet is a small, pocket-sized blaster. It has the Zombie Strike logo embossed onto it and a black trigger. 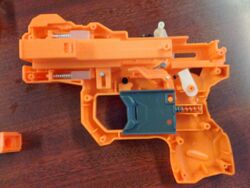 The Ricochet has very few internals to speak of. It has a firing trigger, catch, catch spring, spring, plunger and disc chamber.

The Ricochet acts as the quick-draw blaster in the line. Due to it being so small, it can also be adapted to a stealth role, as it is able to be concealed in a pocket and taken out quickly.

The Ricochet seems to be the smaller brother of the Ripshot as it resembles the blaster and both blasters load from the muzzle.

The main fault of the Ricochet is its low capacity. You have to reload the blaster every time you fire it. Another main problem with the blaster is its range; it only hits around thirty feet.

Step 1 - Put an XLR disc in the barrel and push it all the way in.
Step 2 - Pull the slide back. Note that it will not go back in place.
Step 3 - Pull the trigger to fire.
Step 4 - Push back the slide.

Retrieved from "https://nerfpedialegacy.fandom.com/wiki/Ricochet?oldid=42288"
Community content is available under CC-BY-SA unless otherwise noted.