Not to be confused with the Swiftstrike, a blaster with a similar name but is otherwise unrelated

The Sidestrike is an 2014 Nerf Zombie Strike blaster that will be able to hold up to 3 Zombie Strike Darts, or 7 with the included holster attached. It is the conventional dart pistol in the series. It seems to be replacing the Scout IX-3 in terms of look, capacity, performance and role in battle. This blaster comes with a holster that will also fit the Firestrike, which will be used to conceal the blaster. It comes with a holster, 6 darts. It fires up to 75 feet. It costs $14.99. The N-Strike Elite logo can be seen on the handle. It was later also released under the N-Strike Elite series under a white and orange and white and blue color scheme.

The Sidestrike is the pistol in the Zombie Strike line. It features a green slide, a grey body, a brown pistol grip, an orange barrel, and either a grey or orange trigger depending on whether or not one's country has dart blaster safety regulations. It can be drawn in and out of its holster. The blaster has a grey loop around the bottom of the handle for a bandolier to be attached to. 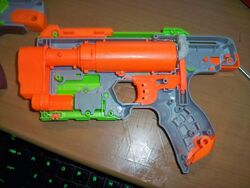 The Sidestrike acts as the sidearm in the line. Due to its long range and quick-draw ability, it can easily act as a reliable, accurate sidearm. Nerfers would usually prefer this over the Ricochet.

The Sidestrike acts as the successor to sidearms with long ranges, such as the Lock 'n Load and the Scout IX-3.

Like all other blasters, the Sidestrike has faults. One of the main faults of this blaster is that it can sometimes produce weak shots, as with most, if not all, Zombie Strike dart blasters. Another problem is the inability to use darts other than Elite Darts or Zombie Strike Darts.

Step 1 - Load 1 dart into the muzzle.
Step 2 - Pull the green cocking slide back and release.
Step 3 - Pull the trigger to fire.

Retrieved from "https://nerfpedialegacy.fandom.com/wiki/Sidestrike?oldid=42000"
Community content is available under CC-BY-SA unless otherwise noted.