The Speedload 6 (formerly known as the Quick 6) is a 2011 Nerf Dart Tag blaster that can hold up to and fire 6 Tagger Micro Whistler Darts. It has an integral magazine that is built into the blaster itself. The priming mechanism looks similar to that of a Spectre REV-5's. The Speedload was later re-released with a blue trigger in 2012 and a boost in range, like most 2011 Dart Tag blasters. 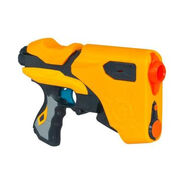 The new blue-triggered variant.
Add a photo to this gallery
Retrieved from "https://nerfpedialegacy.fandom.com/wiki/Speedload_6?oldid=42620"
Community content is available under CC-BY-SA unless otherwise noted.