Super Charger was a short-lived hybrid series of Super Soakers that was first introduced in 1999. The series consisted of six blasters, and all blasters had the capability of using a quick-fill device to refill, which allowed faster reloads.

This was accomplished by connecting the nozzle of a blaster in the series to a hose, which is connected to the quick-fill device, and the blaster would fill itself up from there. Certain blasters, like the Super Charger Power Pak, would only fill via a quick-fill device; there were no other ways of filling it.

Despite the novel capabilities, it was discontinued in 2000. 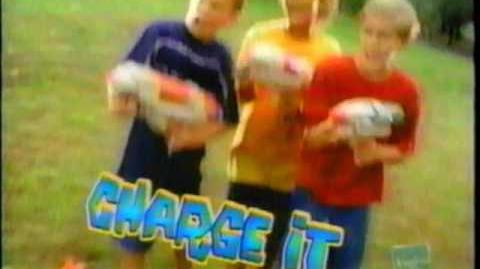 Super Soaker - Super Charger Commercial 400 500 600 - Charge it Pump It (1999)
Add a photo to this gallery
Retrieved from "https://nerfpedialegacy.fandom.com/wiki/Super_Charger?oldid=42987"
Community content is available under CC-BY-SA unless otherwise noted.