The Super Charger Power Pak is a 1999 Super Charger series Super Soaker blaster that holds 3.4L of water. It is no longer available for purchase as its home line has since been discontinued. It got decent reviews. It is a hose- and elastic-pressured blaster.

The Power Pak is a Super Soaker featuring a backpack-type water reservoir that connects to the blaster component itself with a tube. There are three CPS-style elastic water bladders in the backpack, acting as both reservoirs and the blaster's pressure system. The Power Pak also has a port on the front so that it could be attached to a Q.F.D., allowing the user to use a hose to refill it fast.

Step 1 - Fill the soaker with water using the Q.F.D. PLEASE NOTE: It is the only way to reload the soaker!
Step 2 - Select the nozzle setting of your choice.
Step 3 - Press and hold the trigger to fire a stream of water.

Regional color differences
Add a photo to this gallery 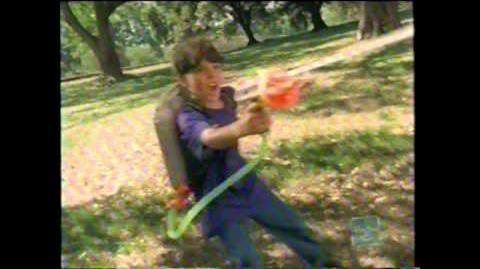