The Titan AS-V.1 (previously known as the Titan AS-V or the Big Bad Titan) is a 2003 Nerf Action Blasters blaster that can hold one Mega Missile. The Mega Missile is very large. The Big Bad Titan's name comes from 1998's Big Bad Bow, another previously discontinued blaster. It has a reverse Tactical Rail, designed so that small blasters such as the Reflex IX-1 and Scout IX-3 can lock onto the blaster. Larger blasters may be attached, but this is not recommended. A modified Titan can reach ranges over 100 feet. If modified to fire darts, it can fire them 200 feet.

The Titan AS-V.1 is the main blaster in the Unity Power System. It has either a red, blue or greem body, with the various paint schemes found in the Unity Power System or bought by itself, in a multi-pack of the Titan and Scout IX-3, and the Hulk Abomination Blaster respectively. It has a pump with a black grip that is the same color as the body. There is a power gauge that measures how much pressure there is in the blaster. When overpumped, all the pressure is released from the air tank. When pumped, the needle in the power gauge moves. The gauge faces up when the blaster is being pumped and faces forward when being held like a normal blaster. The Titan has two firing triggers and one large orange firing button. The rear trigger is used to fire the Titan, while the front trigger is used to fire the Hornet AS-6. When the trigger is pulled, the trigger sends air to the trigger to open the air valve which released air into one of the six barrels. The button is used to fire the Scout IX-3 via a piston that comes out to push a button on the top of the Scout's slide. The button releases the catch on the Scout's plunger, which releases it and fires the dart. 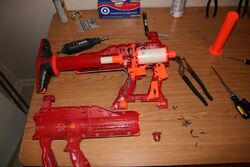 The internals of the blaster are standard for an air blaster. There is an air tank, overpressure valve, firing trigger, secondary firing trigger, firing button and air delivery tube.

The Titan does not seem to be related to any sort of blaster, due to it being a rocket launcher.

Step 1 - Load a mega missile onto the front post.
Step 2 - Pump the blaster 16-26 times. Do not overpump or it could ruin the blaster.
Step 3 - Pull the rear trigger to fire the blaster.

Firing the Scout from the Titan

Step 1 - Load one dart into the Scout's muzzle.
Step 2 - Pull the slide back and release to prime the blaster.
Step 3 - Push the orange fire button on the left side of the blaster to fire the Scout.

Firing the Hornet AS-6 from the Titan

Step 1 - Load one dart into each of the Hornet's six barrels.
Step 2 - Pull the slide on the Hornet forward to reset the "Shots Left" indicator.
Step 3 - Pump the blaster 20-30 times. Do not overpump the Hornet or it could ruin the blaster.
Step 4 - Pull the front trigger of the Titan to fire a dart, or push the Hornet's blast button to fire all 6 at once.

Retrieved from "https://nerfpedialegacy.fandom.com/wiki/Titan_AS-V.1?oldid=41680"
Community content is available under CC-BY-SA unless otherwise noted.