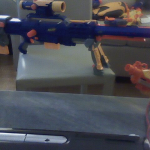 "When life gets complicated... I need a cup of coffee."

First of all, yes, I did steal that thing NSA does at the top of his page. But I think he's fine with it.

What's up? Oh, and how did you find my user page? (Well, I guess maybe I'm a bit more famous now. Still not famous, though. A famous guy would be someone like my Singapore buddy NSA335.)

I'm BSim, but just call me Red (hence, redwag123) for short if you want. I'm a musician, singer, audiophile, songwriter, poet, dancer, actor and etc. So why am I here? Because I'm also a nerfer. Not a serious one. Just casual. I also play COD, but that's something else. (See COD link below.)

My profile page on this nerf wiki is more complete, but doesn't say much about my COD life. That's on the Call of Duty wiki. which I haven't even started to use that much. I'm working on it, though.

UPDATE: I finally got around to updating my COD wiki page.

I may not have many yet, but whatever.

NSA335: This guy's f***ing awesome. And crazy (for doing all those edits.) But still awesome. (Singapore buddies!) This is also the guy who helped me out a lot when I first came here and still helps me out. Don't get on his bad side, though... XD

TMG: Another awesome guy. He also happens to be the first person I talked to on all of Wikia. (And he "introduced" me to Rampage11. Oh god, I don't even wanna talk about that dude. Man, the first time you see a review by him, you'll know wh at an actual biased review looks like. XD)

NN666: Haven't talked with him that much, but he seems nice. Dunno what his impression is of me, though. Hope it's a good one... UPDATE: He says I'm pretty cool. Yes!

Nerfking77: May not know much about him, but he's a nice guy. A very good editor as well.

Jetcell/JetCell: She actually seems like a nice person... It's just that I've heard bad things about her from some friends. I won't think badly of her, though, until further notice. Dunno what she thinks of me, though. Hope she has a good impression...

Nighttime Nerfer: A nice guy, as well as a good editor. Definitely get to know him if you can. It's totally worth it. I also hope this guy can become a rollback soon.

RNN6: Fun guy to be around. Definitely.

Jelliot94: He seems like a nice guy at first, then the moment RNN6 deletes our conversation, he explodes...Well, I'll tell you that my impression of him changed after that. (Obviously.) I'll admit that I didn't want the conversation to be deleted, but technically speaking RNN6 did the right thing, so for the most part fine I'm with it.

Nerfmaster8: I dunno... He seems like a nice guy, but I've heard bad things about him, so I don't know what I should think of him. I kinda want to stay on everyones' good side. I'll try not to be a jerk to him, though.

People who mess around with everything on the wiki, people on the wiki and my friends:

Pretty much, I won't get annoyed at you, and shouldn't get annoyed at you, unless you start messing with the wiki. First of all, as much as I love the fact that being an admin lets me undo edits easier, it's not like I enjoy undoing a zillion edits on every single f***ing page on the wiki made by someone just to annoy the hell outta me, my rollback buddies, and the admins/bureaucrats. Pretty much, just don't mess with the wiki and/or others (especially my friends, though I'm sure that NSA335 and TMG will be able to handle you.), and you don't get on my bad side. If you for some reason hate me and want to get on my bad side, weeelllllll, I dunno what to say to that, other than all your edits will be undone and you'll eventually be blocked by an admin in the process, or, at the very least, given a warning.

Definitely that one that says, "You must be drinking way too much coffee." It's so true. (If you want to see it, go through the list of badges I've earned on the right of my user page.)

So, yeah. Pretty much just go to those two links to view a more complete profile, read all the other stuff if you want, and that's pretty much it. If you wanna ask me a question for whatever reason, feel free to do so and post it on my talk page. I'll try to reply as quickly as possible! Thanks for coming to visit, even if there's not much here!

(Note: At first my nickname may not make much sense, but here's the connection: That happens to be my Playstation Network Account username. So it's not completely random. [Sorry to all the guys and girls out there that want my username but have an XBOX. I have an XBOX 360, but it's broken, so I use my PS3.])

Retrieved from "https://nerfpedialegacy.fandom.com/wiki/User:BSim?oldid=36386"
Community content is available under CC-BY-SA unless otherwise noted.